The art of the Cyclades and the English painter John Corbidge. Presentation by Costas Serezis at the International Tourism Conference, Amorgos 18-22.4.2012

The art of the Cyclades and the English painter John Corbidge.

We are on an island of the Cyclades and I have selected as subject of my presentation the painting of an artist who was inspired for a long period of his creative career, from the art that was developed during the ancient era in the Cyclades. The artist is John Corbidge. His homeland was England because that is where he was born, a place that he never, of course, disowned but he selected as his life’s homeland Greece and Cyprus where he lived throughout his youth and maturity and where he spent his most creative years, until the end. He adapted himself in this area and it is from here that he drew his artistic dreams and it is here that he laid his rich and important work that is a dive into the world of ancient Greek wisdom and the multicoloured byzantine art. When the end neared he asked his Greek Cypriot wife to scatter his ashes in three places: Sirolo near Ancona in Italy, his first stop after leaving England.There he first taught art after finishing his studies at the Slade School of Fine Art of the University College London. The other place was Pissouri on the south coast of Cyprus towards the town of Pafos very near a chapel that he filled its walls with frescoes that were, in fact, his swan song. The third and last place where his ashes met the winds, always in the sea was a beach on the island of Mykonos. Near a house he had made, in complete accord with the local tradition. It is on this island that he spent, together with his family, his last twenty summers creating works with the central focus on the Cycladic idols in the Aegean light that dissolves everything and at the same time shows the lines and the colours. Conscious choices, choices of life, dedication and adoration. It is for this reason that the municipal council of Mykonos organized, last summer, one of the last distinctions dedicated to him.

An honorary exhibition tribute to his art. A local recognition of what the painter offered to the island and a reciprocation of his love for Mykonos. John Corbidge’s art was steeped with an impulsive irresistible greekness, with a painting alphabet referring to elements of Greek aesthetics. The reason I have pinpointed the geographic position we are in, it is to stress that the Aegean is one of the basic themes that was the epicenter of his art. It was a deep impulse that is obvious how ingeniously he uses the blue colour in his explosive multicolour paintings. 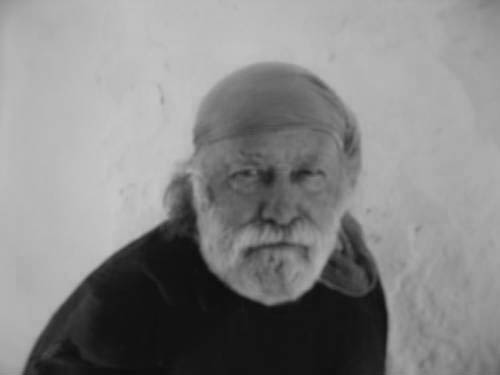 It is so diffused everywhere until exhaustion that reminds us of Elytis words “Oh Lord how much blue you use so that we cannot see you”. It’s this Aegean blue that dominates as soon as you open an island window taking these deep ocean hues, when etesian winds hit the top of a wave becoming razor like and hitting the face. John Corbidge’s voyage first brought him to Italy where he lived for three years, from 1957 to 1960, then on to Cyprus and after four years to Athens, in 1964, from where he returns to settle permanently in Cyprus in 1968.

There, his life starts beating unfalteringly to the rhythms of the island. In between he travels the world, exhibits, collaborates with theatres and international film productions and creates mosaics, bas-reliefs, frescoes in collaboration with architectural companies . Above all Corbidge is a painter of colours. Dominant impressions were those of the Aegean, originally lyric. Later his paintings became intensively expressive with an obvious tendency towards expressionism. He was productive and exhibited in many parts of the world. Angelo Dragone wrote in the Italian newspaper La Stampa “Pictures powerfully impressed on backgrounds worked with the confident hand of the artist who knows how to give expressionist value to the abstract imprint”. Bettina Wadia of London’s Art Review wrote: “Movement that is at a standstill indicating its future move, figures in a landscape that are also an abstraction in its real meaning. The equivalent in painting of Fellini’s flying pictures or the encounters of time outside the unique cycle of Durrel’s drama. All these together are Corbidge’s paintings”. During the last decades his paintings were dominated by what really touched and excited him. The Cycladic marble statues and the Cypriot idols made with Andesite rock of the Neolithic age. He was also drawn by the byzantine churches. He produced them in glorious paintings extolling the spirit they represent and their ageless value, everything with shining colours. He wrote about his work “My paintings are a visual course through an area of crumbling reality. As I seek the secret vibration of these archaic works of art, statues, idols, and the mythical wild beasts I connect the ancient fascination with my own times, in a way of restoring the values of an art that although it is in a time space it is timeless”. He presented in various versions, insistently and systematically, leading creations of a world that he admired. For a long time he made this the epicenter of his paintings. He raised the totem of artistic expression. In a way that he praised an ancient, yet always new, world that carries eternal values. 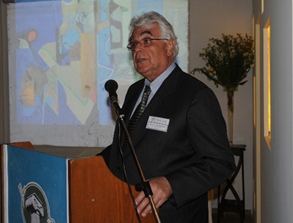 John Corbidge was prolific in everything. His paintings, the colours of his art, his appearance, his expression, his speech. When he spoke Greek he had an epic rhythm and in expression he had a poetic tendency. I give you the title of one of his works based on his Cypriot experiences: “The stars pierce the venetian walls, goats’ carcasses whiten on the rocks, and an endless lament through the ruins of the byzantine churches; everything reaches the sea’s razor’s edge like the wailing of a city that is dying”..
I believe that with his life and work he has turned into present day act what Isocrates wrote in his “Panegyric” at the 100th Olympiad in 380 B.C. “Greeks are those who participate in our culture”. John Corbidge was English. By his choice he became a Greek either of mainland Greece or Cyprus. That was the way he felt and that was the way he acted. He was so sincere in this feeling that it could not but become his conscience and this is the reason that his art through which he expressed and praised this way of life is based on experience and is truly genuine, it is worth admiring for its persistence and result.